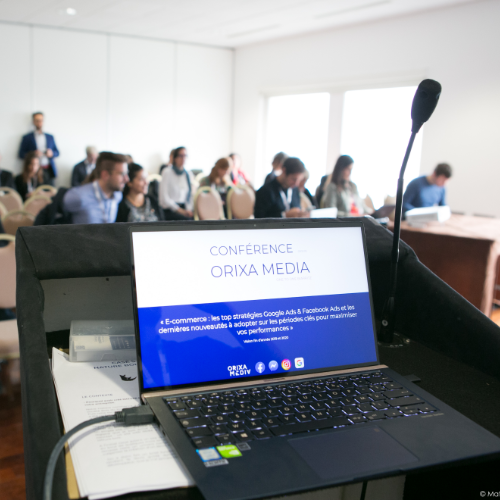 Optimising online advertising campaigns in the run-up to the holiday season via Google Ads and Facebook Ads, proposed by Orixa Media.

Jonathan Lambert from Nature Bois Concept and Fabrice Cuigniez from Orixa Media intervened at this 2019 One-to-One Biarritz conference. Both speakers discussed the Google Ads and Facebook Ads strategies to optimise the campaigns of e-commerce sites.

The digital agency Orixa Media is 100% independent. On a daily basis, it acquires advertising levers on behalf of its customers (search, shopping, programmatic, social media, mobile, SEO, pool performance) through certified teams. The agency was created in 2007. It provides its 35 consultants serving its 90 clients.

It develops technical solutions that meet very specific needs, according to e-commerce sites: Feedcast for flow management, Genelead for the collection of qualified leads in compliance with RGPD standards, and Studioguide to create landing pages. Brand safety is always implemented as part of programmatic campaigns.

Google is today the world’s first search engine, in a quasi-monopoly position in France, thanks to a very powerful algorithm and a dynamic attribution model. Facebook, its counterpart in terms of social network, has an extremely rich audience and a great targeting power.

Looking ahead to the end of the year, we can see that consumption patterns have changed in recent years, particularly through events such as Black Friday or Cyber Monday. Internet users' buying peaks are increasing before parties. On the other hand, most e-commerce advertisers have not made any changes in this respect in terms of investments. However, it is necessary to:

We also observe that, every year, research on Black Friday changes. Between 2014 and 2018, the volume of transactions increased by 347%, of which 265% over the last year. In 2018, we was that 40% of Internet users made their Christmas purchases the week of Black Friday. In 2019, they will have six days less to make their purchases between Black Friday and Christmas, which leads to more contracted e-commerce communication.

Consumer habits are also changing at this time as buyers are more diverse; gifts lead to higher consumption of high-tech products by women, and of beauty products or books by men.

For 30% of Internet users, Christmas shopping starts in October. Finally, the Single’s Day, on November 11, came from China, is also to be followed because it will take on importance and because it allowed Alibaba to overtake Amazon in volume that day (25 billion euros of turnover).

Moreover, 65% of purchases are made on mobile, which makes it essential to take care of the mobile site. Mobile has profoundly changed our connection habits, through frequent, rather short and unplanned sessions.

From now on, users regularly scan their news feeds. Internet users' expectations are also changing: a third of them are ready to abandon a brand after a single bad experience. They are willing to pay to be delivered faster and are particularly attentive to the reactivity of the e-commerce site. Therefore, it is necessary to:

Google Ads and Facebook Ads: the strategies to put into place

The first thing to do is to define its objectives and allow any work of automation and algorithmic optimisation. Search and social have their own logic. By following good practices, both allow e-commerce to gain about 30% incremental income.

Actions to take on search (Google)

We will have to propose relevant ads, updated over the year-end period.

According to Fabrice Cuigniez, “it is recommended to create several ETA ads and especially RSA so that the algorithm always has the possibility to give the most personalised answer possible to the user, depending on what Google or Facebook knows about it.”

The same observation as before: it is necessary to create a maximum of customised ad formats in order to allow the algorithm to constantly address to the user the most effective advertising.

Today, Facebook makes it possible to do a lot of things in terms of videos (on Instagram, or in story format, carousel or collection), which can be addressed precisely, depending on the data collected by e-commerce.

Second, you need to look at your listening strategy, including “similar listening”, based on the tagging plan done upstream. This will also make it possible to create campaigns relating to customer databases that, injected into Google or Facebook, produce similar audience pools.

Finally, it is imperative to launch remarketing campaigns for leads, depending on their position in the conversion tunnel.

The Feedcast solution, developed in-house, allows to interact on the product flows (titles and descriptions) of e-commerce sites, to correct any errors, and also to arbitrate according to the performance objectives defined for Google, Facebook and, ultimately, Amazon.

A warning and price monitoring system raises competition prices in the context of advertising arbitration. Hence the creation of automated campaigns on different criteria (stocks, prices, competition, gross margin, etc.). In addition, Feedcast makes it possible to get rid of the 20% commission for any e-commerce advertiser using Google Shopping.

Nature Bois Concept is a company created in the 1980s, which began a web shift in 2012. Ahead of the competition, the company launched a showcase site. From the moment they used Google Adwords (now Google Ads), the brand generated a lot of leads.

Simplified configurators were set up in order to make online specifications more accessible. No wood skills were now required before purchase. In parallel were created a magazine, to promote the brand and improve the SEO, as well as e-commerce, complementary to the main site. The company then used Orixa Media to increase its ROI. Result: 20% additional estimates for a 20% reduction in the budget allocated.